Key points about the data

The Human Multiple Births Database (HMBD) provides the number and rate of twin deliveries for different countries. Statistics on other multiple births (i.e., triplets, quadruplets, etc.) are also provided whenever possible. Figure 2 illustrates the coverage of the current version of the database, based on the availability of the twinning rates . This database is under construction; data for further countries will soon be available.

Data on multiple births by certain characteristics (the sex-composition of the births, age of the mother, etc.) exist for some populations during specific periods. A list of sources offering such detailed data is available in the Supplemental Data Table (available in Data and metadata).

The HMBD data come from the civil registry of each country. Only those countries with exhaustive birth records –i.e. where all births are declared and included in the civil registry,– are included in the database. Another condition is that the national statistics office of each country must regularly publish statistics on the number of births by multiplicity, distinguishing single deliveries and those of multiple children, and further specifying the number of multiple deliveries by number of children involved (e.g. twins, triplets, etc.).

Events of interest: the deliveries

Treatment of stillborn children in the statistics

Treatment of stillbirths in the statistics on multiple births constitutes a further difficulty that deserves special attention. It may vary from country to country and over time within the same country. In cases involving the birth of twins when one child is born alive and the other is stillborn, the delivery can be counted as a single delivery (because it resulted in one live birth) or as a twin delivery, depending on the definitions and reporting practices in each country. If both children are stillborn, the delivery may or may not be counted. Information on the treatment of stillborn children is included in the metadata for each country whenever possible, as this information is not always clear in the data sources.

The data series for each country included in the HMBD go back into the past as far as possible. As shown in Figure 2, the data for some countries start in the 19th century. The countries with the longest and most complete time-series in the database are Sweden and Denmark, with uninterrupted data since the years 1815  and 1850, respectively. The historical data included in the HMBD also come from the civil registration system of each country, mainly from volumes published by their national statistical offices (e.g. statistical yearbooks and the vital statistics of births, deaths, and marriages). Scientific publications are also considered for some countries. The data sources used for each country and period are indicated in the metadata (see Data and metadata).

The HMBD is the continuation of a database on multiple births created by Gilles Pison, with the collaboration of Agata D’Addato (Pison and D’Addato, 2006), as well as Christiaan Monden and Jeroen Smits (Pison, Monden, and Smits, 2015).

Figure 2. Coverage of the HMBD according to the availability of twinning rates 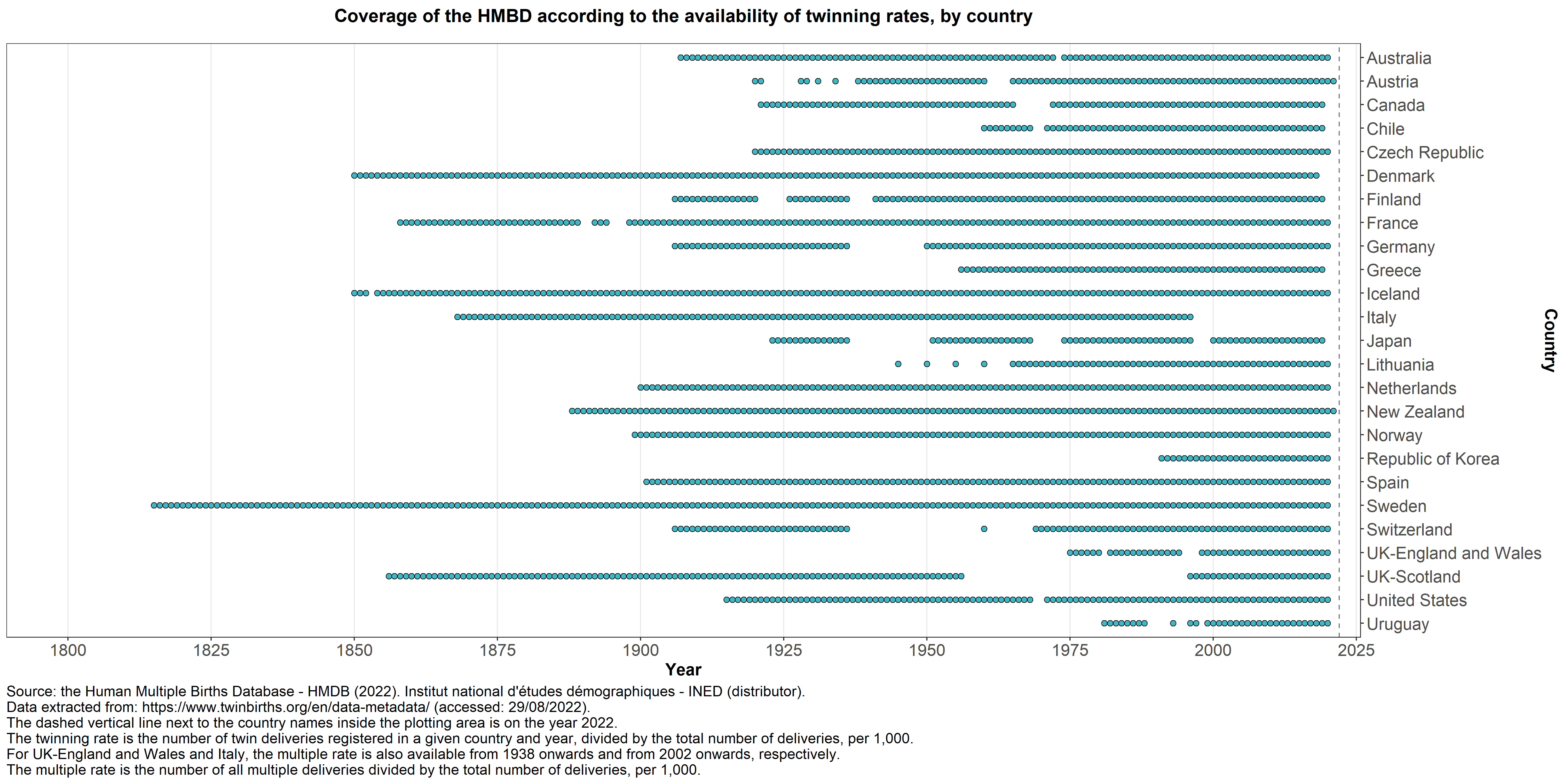